Luv Dogz Ltd is pleased to announce they are supporting the Animals Asia Foundation!!!

“Cats and dogs in China are often abandoned and left to subsist on the streets, with many dying due to illness or accidents. Government authorities organise brutal dog-killing campaigns to try to reduce stray dog populations. Stray dogs and cats are also snatched from the streets and pets are stolen and taken to horrific meat markets, where they are sold for human consumption and often suffer a slow, violent death.”

“We conduct investigations into live animal markets, dog slaughterhouses and restaurants across China to catalogue abuse and inform the government and public of the cruelty, illegality and human health concerns surrounding the industry. In China, Animals Asia’s field officers regularly visit and document the horrific facilities that drive the cruel, and often illegal, trade-in cats and dogs for their meat. We gather key information and evidence about the markets, slaughterhouses and restaurants – investigation reports, photographs and film where possible – to help us highlight our concerns to the relevant authorities and encourage their support for change. We use this information to bring the cruelty of the meat trade to the attention of the public through community awareness campaigns, photo displays and banners, and media interviews.”

More than 10,000 bears – mainly moon bears, but also sun bears and brown bears – are kept on bile farms in China, and around 2,400 in Vietnam. The bears are milked regularly for their bile, which is used in traditional medicine.

Bile is extracted using various painful, invasive techniques, all of which cause massive infection in the bears. This cruel practise continues despite the availability of a large number of effective and affordable herbal and synthetic alternatives.

Most farmed bears are kept in tiny cages. In China, the cages are sometimes so small that the bears are unable to turn around or stand on all fours. Some bears are put into cages as cubs and never released. Bears may be kept caged like this for up to 30 years. Most farmed bears are starved, dehydrated and suffer from multiple diseases and malignant tumours that ultimately kill them. 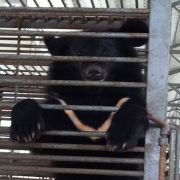 Animals in China’s zoos and safari parks suffer a range of abuses. In many places, terrified cows, pigs and chickens are fed to lions and tigers as live prey for entertainment. Captive wild animals are often cruelly mutilated with their teeth and claws cut back. They may also be chained and used as photographic props or forced to entertain the crowds with unnatural, degrading and stressful circus-style performances.

The techniques used to force the animals to perform are often cruel and abusive and the conditions in which they are kept generally fall far below acceptable welfare standards for animals in captivity. Many display severe stereotypic behaviour, such as pacing and swaying, due to neglect and poor management. Most receive no medical care and many suffer from injuries and diseases that are left untreated.